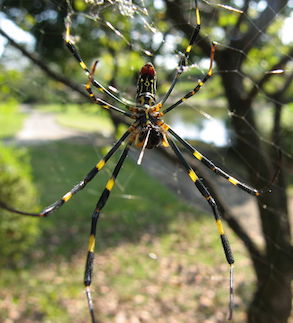 DC area residents and others living on the East Coast may soon find themselves facing an invasion of giant flying spiders. This may sound like a horror movie, but it’s the real thing. Large enough to cover the palm of your hand, the Joro spider is quite intimidating. But will these creatures pose a problem or will they simply be a colorful new addition to the insects in our area this spring?

These are some things to know about the Joro spider (Trichonephila Clavata):

The Joro spider is believed to have been in Georgia for nearly nine years now, and may likely spread its range north and south, including the DC Metro area as soon as this spring. However, there’s no need to worry. At this time, experts say there’s no evidence Joro spiders will cause damage to trees or plants. They seem to be merely an aesthetic annoyance because they spin huge webs that can stretch across landscaping, porches, lawn furniture and power lines.

Joro spiders may be big and scary looking, but they are only dangerous if you’re a tiny insect, such as a brown stink bug or mosquito. While these spiders do use venom to hunt, their bites are not harmful to humans. If a Joro were to bite a pet or human, their fangs are believed to be too small to break the skin.

Call in the Pros to Get Rid of House Spiders and other Pests for Good!

Luckily Joro spiders are harmless. However, if you find that you are having a problem with spiders, such as house spiders, different insects, termites, or other pests in your home or office, and need an exterminator, be sure to call Alexandria Pest Services at 703-923-0925 to schedule a professional evaluation. At Alexandria Pest Services, our team of expert technicians will work with you to create a plan to eliminate your pests. We can help you get rid of these invaders in your home or office! Contact us today to learn more.