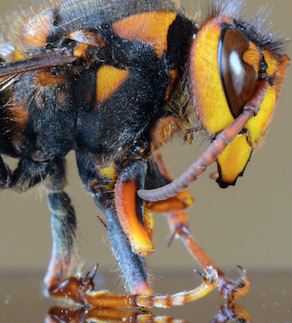 The threat of Asian Giant Hornets, or “murder hornets” as they have been called, coming to the U.S. has been alarming to many of us, especially after a few were spotted in North America. But according to a professor at Virginia Tech, no murder hornets have been sighted in Virginia — or anywhere on the East Coast for that matter.

According to Tim Kring, professor and head of the Department of Entomology in the Virginia Tech College of Agriculture and Life Science, the first murder hornet spotted in Vancouver, British Columbia, Canada was in fall 2019. In November, a single murder hornet was spotted 10 miles away from the first one, still in Canada. The first hornet was spotted in the U.S. in winter 2019, but experts believe it only traveled that far due to the Pacific winds. Kring said the nest it came from was destroyed and none of these hornets have been seen in 2020.

Murder hornets are fairly common in mountainous regions of Asia, but they’re not often seen in highly populated areas. They usually nest at the base of large trees and inside dead logs. They can’t tolerate hot summer temperatures or very cold temperatures in the winter, making it unlikely that they would spread to areas that have hot summers or cold winters in North America.

Speaking of hot temperatures, honeybees in Asia protect their hives from intruding murder hornets by scorching them. They wait for a hornet to enter their nest, then mob it by surrounding it completely with their bodies. Each honeybee vibrates its wings, and the combined warming of honey bee bodies raises the temperature in the center of the cluster to 122 degrees F (50 degrees C), killing the hornet. Carbon dioxide levels in the nest also increase during this process, which contributes to the hornet’s death.

Kring also offers some solace in saying, “If murder hornets are discovered to be established in the Pacific Northwest later this summer, both American and Canadian governments will work hard to eradicate it. Even if that fails, the spread is less than 40 miles a year, and it would be years before it spread from Canada to the East Coast.”

Kring said Virginia has several large hornets less than 1.5 inches long that might be confused with the murder hornet. These bugs include:

Call Us to Help You Get Rid of Hornets, or other Pests or Rodents!

We hope you and your loved ones stay well and healthy during this time. We are open and following all CDC regulations. Please call us today for all of your pest control needs!