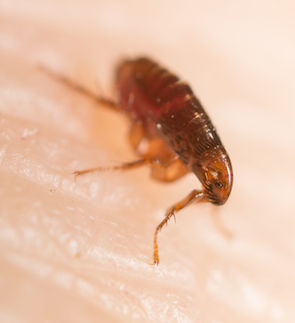 Ever see small bugs in your bed and wonder what they are? Are they fleas that the dogs brought in, or could they be bed bugs? Both bed bugs and fleas are pests that can bring unwanted consequences to your home. While they both can make you itch, there are several things that set the two apart from each other.

Bed bugs are excellent hitchhikers. They hide in purses, luggage and other personal belongings in an effort to find a human food supply. These bugs likely get their name from their habit of feeding on humans while they sleep in their beds. One bed bug can lay 200 eggs in a lifetime, which is approximately a year. Fleas are different in that they transport themselves on household pets and wild animals, and are parasites that feed on the blood of any warm-blooded body. The most common species is the cat flea, which often feasts on cats, dogs and humans. One flea can lay between 150 and 300 eggs every week.

Here are some other ways to compare fleas and bedbugs:

Whether you have fleas or bed bugs, early detection and treatment is crucial. While bed bugs do not pose any major health risks, fleas are known carriers of bacterial infections, as well as the now rare bubonic plague. At Alexandria Pest Services, our expert technicians will provide a free inspection to determine your pest issue and come up with a customized plan to treat the issue. Contact Alexandria Pest Services at 703-923-0925 today to schedule an appointment.